Nashville’s Major League Soccer expansion team is getting a home — and the city’s fairgrounds is in for a controversial major overhaul.

The Metro Council voted late Tuesday to give final approval to three ordinances and a resolution that clears the way for a much-debated $275 million stadium project at the Fairgrounds Nashville that includes a 10-acre mixed-use development with housing, retail, restaurants and a hotel.

It marks a win for Mayor David Briley, who put his political capital on the line to push a project started by his predecessor, former Mayor Megan Barry.

And it’s a sigh of relief for the expansion team’s billionaire businessman lead owner John Ingram, who faced a scare getting the stadium approved.

The key action was a 31-8 vote to demolish existing buildings and structures at the fairgrounds south of downtown.

The ordinance, which also enacts a $1.75 ticket tax at the stadium that will increase over time, faced a 27-vote threshold for passage, presenting a greater test than the three other bills, which needed just simple majorities. In the end, it picked up seven additional votes than the 24 it received on a second of three votes, making for a comfortable margin.

Its approval was followed by loud cheers from happy soccer fans wearing blue and gold Nashville Soccer Club gear and a few jeers from angry opponents dressed in red.

“Giving it away!” one woman yelled from the gallery. “Choke on your soccer ball!”

The other three actions rezones the 10 acres to allow the mixed-used development; approves a 99-year ground lease between the city and the team for the private development; and authorizes $50 million in general obligation bonds to rebuild fairgrounds buildings and provide infrastructure upgrades.

Each were approved with at least 30 votes of support.

Several council members who voted for the project said they were torn, with some still bemoaning certain components, particularly leasing the 10 acres to the team’s ownership for private development. The development will be led by MarketStreet Enterprises, minority owners of the MLS franchise.

“I’ve been tossing and turning about this whole thing,” said At-large Councilwoman Sharon Hurt. “But I’ve been converted. I do believe this can be something that’s great for this city.”

Councilman Mike Freeman, whose district borders the fairgrounds, told his colleagues, “I have no doubt I will have to answer for my vote tonight,” referring to ramifications it could have on his reelection.

“If I were to vote with my heart, I would be a no. But my neighbors have other ideas. They see this as a chance for South Nashville, especially the 16th District’s chance at major development,” Freeman said. 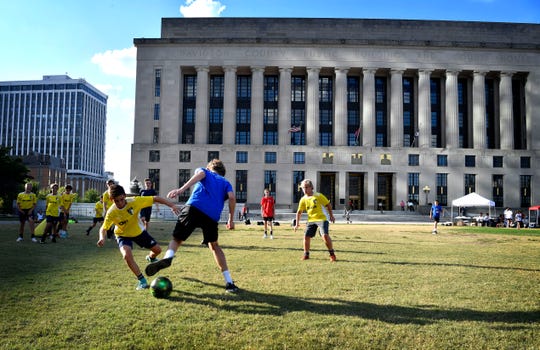 Councilman Robert Swope, a surprise yes vote on the demolition bill, said the council and community have both been “lied to” about the project, but voted for it anyway.

He pointed to recent conversations from Mayor David Briley’s administration to bring back NASCAR to the the speedway at the fairgrounds.

“It has ripped this city in half, and I’m tired of it,” Swope said of the stadium issue. “But I think if we’re all successful here that everything can exist and it can uplift the whole community in that area.”

Nashville’s MLS franchise, led by Ingram, was welcomed into the league in December in large part because a stadium deal seemed secure.

But Ingram faced difficulty in recent months sealing the deal, with the politics changing following Barry’s resignation and after a rocky budget where pay raises to city employees were reneged upon.

The approval of each piece of legislation now finalizes the requirements necessary for Metro to issue $225 million in revenue improvement bonds for the 30,500-seat stadium, which is set to tentatively open in February 2021. The team is expected to begin MLS play in 2020 with Nissan Stadium as its temporary home.

The votes came after lengthy debate and after the council earlier in the night voted 25-12 to reject a resolution sponsored by At-large Councilman John Cooper, an outspoken stadium critic, that sought a November referendum to let the public decide the $50 million in general obligation bonds.

Cooper pointed out that Miami, which was also awarded an MLS franchise this year, has been unable to finalize a stadium deal and is now seeking approval via referendum this fall.

“This is not about derailing soccer,” Cooper said. “This is about listening to the voters. What’s happened since the last time we voted on soccer? Our finance director has told us we’re broke.”

“Get the public’s approval,” he said, adding, “For more than 100 years, this has been the most loved public land in Nashville.”

Councilman Steve Glover, another stadium critic, pointed to Nashville voters’ overwhelming approval in 2011 in support of protecting existing uses at the fairgrounds.

“Over 70 percent said, ‘Don’t mess with the fairgrounds.’ But I guess that just wasn’t good enough for us,” Glover said.

But Councilman Colby Sledge, whose district includes the fairgrounds, said a public vote in November would delay the entire schedule of the stadium project and prevent needed fairgrounds upgrades from happening.

“This is essentially a vote against the fairgrounds,” Sledge said.

Ingram, who hails from one of Nashville’s most prominent families, went into Tuesday’s vote with momentum after team ownership was able to secure a third-party community benefits agreement with the group Stand Up Nashville, composed of labor unions and other stakeholders.

It proved key in bringing many undecided voters over, particularly African-American council members and others in the council’s Minority Caucus.

The signed contract assures that 20 percent of housing at the mixed-use development will be affordable, as well as a $15.50 minimum wage for stadium workers, an on-site day care center, workforce development programs and “high road contractors” for the stadium’s construction.

It also includes a commitment to ensure that 25 percent of contracts for the private development go to minority- or women-owned companies, along with an additional 25 percent diversity commitment for contractors of stadium operations.

“It really shows the signs of a healthy, progressive city,” At-large Councilwoman Erica Gilmore said. “It helps minorities who have been left out in participating in different contracts with the city.”

“This to me is true Nashville.”

Councilman Anthony Davis said, “For many of us, the community benefits agreement was a must.”

“We asked for better standards,” he said. “And we now have a template for going forward in this city for capital projects.”

In a rare move, Briley used the beginning of the meeting to have a message read aloud by Metropolitan Clerk Elizabeth Waites that touted the community benefits agreement and urged the council to support the project.

“Tonight is the time to act,” Briley’s message said. “I dare say that no public project in the history of the Metropolitan government has received more public participation and scrutiny than the proposed MLS stadium and mixed-use development at the fairgrounds.

“I firmly believe this project is good for the Metropolitan government and is good for Nashville.”

He applauded the council in a statement after the vote, while pledging to improve the fairgrounds but “not change our customs or the activities we cherish.”

“I pledge to all of those engaged in these discussions over the past months that I am listening,” he said.

The fight over the fairgrounds’s future exposed a cultural and generational divide in Nashville. 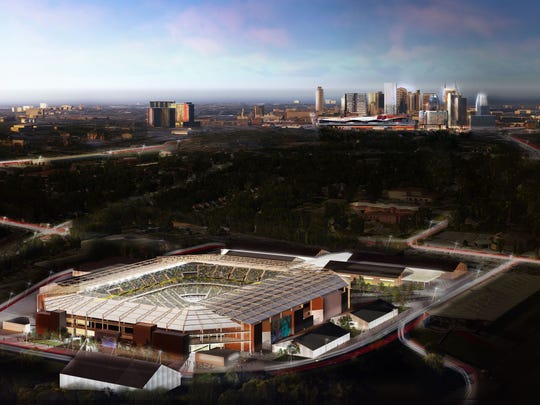 Many younger Nashvillians, including new residents to the city, pushed for the stadium while resistance came from a more conservative coalition of Nashvillians with long ties to the fairgrounds.

In a prepared statement, Ingram called the council’s support “not only a win for soccer, it’s a win for all of Nashville.”

“We won the bid for MLS by showing how Nashville works together, tonight is another shining example of the spirit of our great city,” Ingram said.

Critics have slammed the stadium project as a real estate deal, not a stadium undertaking, calling it a “giveaway” to part with the 10 acres, valued at $20.7 million, for a private development project.

Supporters have touted the growth of soccer in Nashville and what bringing an MLS franchise would mean for the city’s continued growth. They’ve also said it would help activate a underutilized fairgrounds property.

One of the leading opponents, an organization called Save Our Fairgrounds, led by fairgrounds advocate Rick Williams, announced just hours before the vote the filing of a lawsuit against Metro. 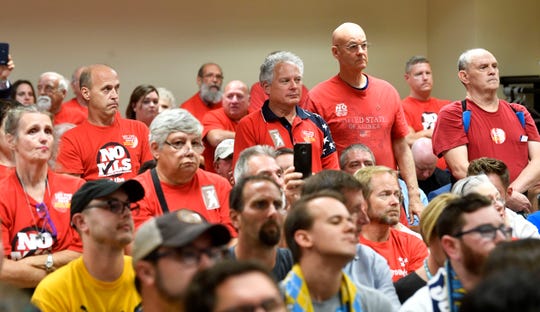 Attorney Jim Roberts said the suit will be identical to a lawsuit filed by the group last year that cites the city’s Metro Charter to argue the stadium can’t be built at the fairgrounds. It was dismissed in Chancery Court, with Chancellor Ellen Hobbs arguing the plaintiffs failed to demonstrate harm or injury. Roberts said the fact the council has now taken action on the stadium has demonstrated the injury.

Roberts said the suit is intended to block the “destruction and rape” of the fairgrounds.

Arrangement of the deal

Under the stadium plan, the city would pay $225 million in revenue bonds for the stadium while the team would would chip in an initial $25 million capital contribution. The team has committed to cover all cost overruns, and separately is tasked with covering a $150 million expansion fee with MLS.

Under a 30-year stadium lease agreement, the Ingram-led ownership group would pay around $9 million annually to help retire an estimated $13 million in annual debt.

Metro has guaranteed at least $4 million from sales tax revenue collected at the stadium and a $1.75 ticket tax, but the city would be on the hook if those streams don’t create the expected amount.

The 99-year ground lease for the 10-acre development calls for the ownership club to pay a minimum of $200,000 annually for the first 30 years, at which point the amount would escalate, totaling at least $22.8 million over the entire 99 years.

How the council voted on the fairgrounds demolition ordinance

Originally posted by: The Tennessean